When it comes to speed and scenery, hardly any other current SF series (yes, all one and a half!) Can fool the doctor bustle. But is it always enough to present confused stuff at the speed of an express train? Or do we sometimes not need a tear-resistant hectic condom after all? This episode leaves me very divided, which almost gives me a guilty conscience ... After all, they really TRIED, which one could never say about SGU, for example. Therefore: The grade 1 for “Behavior” and “Calligraphy”!

Content: A foreign power lures Timelords and TARDISSE to a planet at the end of the universe. When the Doctor arrives, the soul of his TARDIS is stolen and transferred into a woman, while his spaceship suddenly becomes extremely hostile.

Actually, I like the crazy, planned Who scripts. But this time I had the feeling that I was visiting the insane asylum at the “open day” and when I left I had to find out that someone had nailed the exit. This screenwriter definitely fell in love with the LSD pills as a kid, and that off the three-meter board. There is hardly any other way to explain what we see here if we briefly move our hands away from our eyes:

- Stapled together costume zombies with a death certificate issued in advance
- the TARDIS soul in a woman who has the same nervous loose contact in the musculoskeletal system as the doctor
- a collapsed replacement TARDIS for convertible operation
- AND a TARDIS that drives Tardis and Rory into that madness with dark psychological experiments for which the viewer has long since signed a lease. 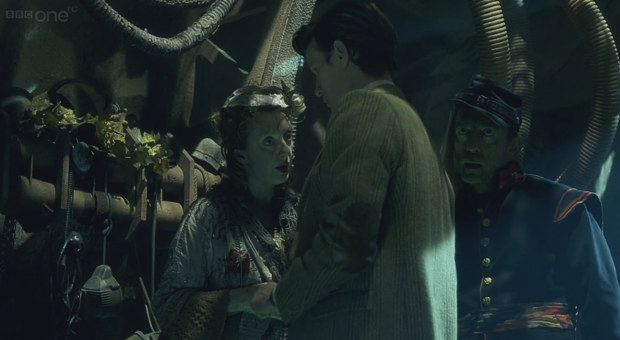 “These guys are kind of creepy. And they speak exactly at the same time! Maybe former guests of Anne Will? ”- Time Zombie Carnival: Have you ever noticed how strange a species is that calls itself“ Timelords ”? I mean, WE don't call ourselves “gods of the big city” or “kings of refrigerator”, do we?

Yes, I usually appreciate all of that when Steven Moffat misplaces a red thread or when people are amazed. BUT when the ideas seem a bit too "random" and EVERYTHING happens that the author has just injected onto paper with the "Sonic beer bottle opener", I feel a bit ripped off. Especially since emotionally this time both dead and thick pants are made: I didn't really want to find out that the mysterious TARDIS soul is just a hyperactive housewife with Tourette's syndrome. And since the predecessor Doctor has everything Timelordel been so lively and compulsively fun that even the "Two And A Half Men" fans go running while watching?

At some point there was also the gag that the TARDIS stole the Doctor (instead of the other way around) sucked it out like Mario Barth's “Hömma, Hömmaaaa!” Gags. Visually and in terms of content, I even had to think of LEXX from time to time, where costumed madmen who reside on a heap of junk usually played 90% of all episodes. The scene in which the Doctor locks Amy and Rory in the TARDIS for their safety is also a bit bumpy. A measure that you should ALWAYS take after your past adventures, even if you land on a seemingly harmless picnic planet. But somehow “Scary Voice” had to pug the spaceship with the two and pull through its mindless “door-open-door-to-Rory-old” torture. Sure: all nicely meant ideas, but unrestrainedly pasted together with old chewing gum.

The really good ideas: The doctor's “wife” asks whether everyone is taller inside than outside (in the sense of “complicated”) and at the end says goodbye with a “hello” because she has wanted to say that all through the centuries. And who is "The Pretty One" was also a nice mini-reveal ... 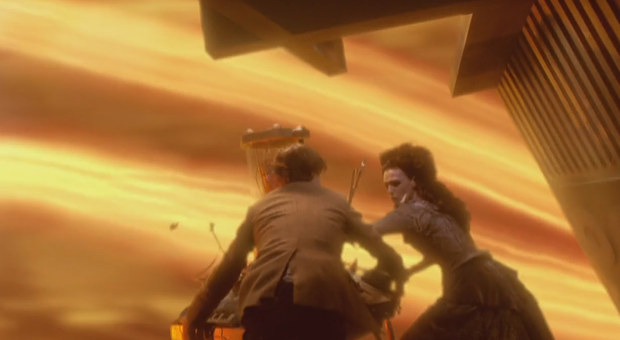 “I'm afraid the hull is threatened with damage!” - “Why, I left you on the planet especially so that something like that wouldn't happen?” - Do you have a fire ... a little less? The prospect of improvised equipment like this may well be worthwhile, but unfortunately you pay for it with disproportionately higher insurance premiums. You also have to wrap the seat belt across your face so that the last meal doesn't drip out of your mouth ...

Can you just push numerous TARDISSE (TARDEN? TARDINETTEN?) Together to form a new one? Okay, the Doctor is awesome, but to create the most powerful technique in the universe by simply knotting components (which fortunately seem big, but not a ton), tells me that when I was 6 years old I wasn't all that wrong, when I wanted to develop a record player myself using plastic waste and glue. But at least it looked quite nice when the two of them whizzed through space with their undisguised platform, like tick, trick and track on a tinkered Gesine over train tracks.

But even the elaborate backgrounds and costumes can hardly enchant you if the characters stay as far away as a rediscovered sandwich from 1998. This time they were all the same to me without exception: The Doctor, Amy, Rory, Spacken. You will also look in vain for emotional “I love you” -substories, tearful moments or a deadly serious doctor's speech when the autistic plot fades noisily in the relay atmosphere. I even found last week's lame pirate fuss a little more accessible.

But well, the end reconciled me a bit, there was at least a reunion with an ood ("Is dematerialized. We landed on it."), With the old Tardis headquarters and also a little sniff from the doctor's tear glands . Understandable, because imagine if your own high-end computer were suddenly a woman who immediately became a fan of you! I would also cry if it suddenly fizzled out again. 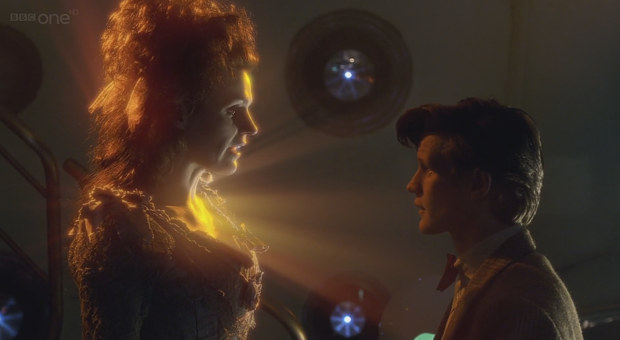 “Unfortunately we have to say goodbye now! It was an honor for me to be able to be there at least once, before all my ideas and wishes dissolve again in favor! ”-“ Shut up, screenwriter! We want to look at each other here in peace! ”- Love is… when you wait in a time machine to see each other again“ sometime ”.

The emo moment seemed a bit sudden after the previous eddy work, but if you don't like the doctor's dramaturgical changes, you just have to watch GERMAN science fiction again ... (“Hey, Inspector! What kind of thing is that next to that Corpse? "-" That's called a cell phone, I think. A cell phone! ")

The Timelord-kidnapping dark voice, which is sadistic enough to spread dark visions, but ultimately can only be fooled: "Why shouldn't I kill you?" Larum! Look, we can change the room! "-" Uuuuuiiii, but that won't keep me longer than 15 minutes, you shit! "

Only marginally there was a reference to the Staffelarc (something with "water in the river"), which could easily be a bit embarrassing. You slowly get the feeling that the whole universe already knows, but wants to keep our heroes engaged with funny visions and puzzles. You can't create anything like that in spectator pants.

Conclusion: Bizarre-interesting-dreary script, true to the motto: "What we always wanted to deepen with regard to the TARDIS", disappears with a lot of racing, flying around and dialog ping-pong. Not really bad, but with a hell of a soul. But maybe it went into the microwave next to my television for a short time?

SPARK'S MEAN OPINION BOX
The doctor is in the details

Ah, there it was, the Who episode, already anticipated by some, from the digital pen of "Coraline" author Neil Gaiman. And it was nice, as was the setting: A rubbish dump, which looks eerily and alien due to nice details like rusty giant spaceships, is even too scruffy for the entire universe and therefore even pushes Gelsenkirchen into second place. You have to create it first!

Nevertheless, I would have given the residents at least a superficial layer of character paint. Nice thing that these consist of several Timelord spare parts, but they didn't spit out more than a few lines of explanation before they suddenly fell over. ("So, I don't have any more dialogue. I'll die then, Tschööö!") But seriously, if someone wears a civil war uniform on the side, then I would like to learn at least one little thing about his background. ("I was just on the Gettysburg battlefield when suddenly a strange door with the inscription‘ Universe - Exit here ’appeared. And of course I was curious, you know?")

Speaking of character: I would have liked a more imaginative villain than “nasty disembodied voice”, which in the end is only washed down the drain of oblivion. Or at best in the drawer with all the other second-rate Who opponents. Maybe Neil could have borrowed a discarded concept from the Moffat? Maybe a peaceful baguette that turns into a devilish monster as soon as you look at it? Or a tree that only falls over as soon as you are out of earshot?

But it's great that you've finally seen a little more of the TARDIS again. And not just because she is briefly changing into a meaty full body suit. Even for the little corridor, the oldie look of which was probably an allusion to (much) older episodes, I was very grateful. And I found Amy's delusions in it pleasantly weird and also reminded me a bit of “Event Horizon”.

It is also pleasant that one has held back a little with the red thread. Ms. TARDIS mumbled something about the "river" for a moment, but after the astronaut two-parter you're used to completely different things.

Conclusion: Not so much a consequence for the large scope of action, but rather a nice touch for all old fans, who can also recognize the many small allusions, from the "cube emails" to the "Eccleston headquarters". Which was admittedly not the case with MIR, but such a small 5 minute research is part of the good form ... uh ... write.