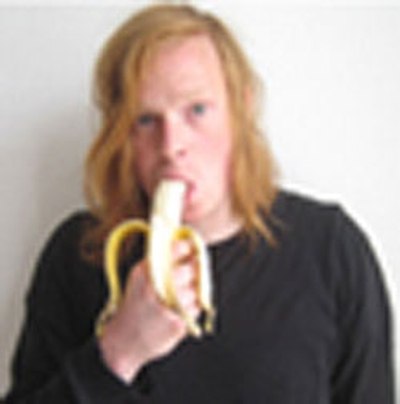 Do you have a brush? Great, I've got a case of beer. Departure!

Without exaggerating significantly, one can say that Steffen Ademmer from Cologne lives the DIY idea: He runs Äthervocxs Records, organized excellent concerts with bands he appreciates in his former flat share, and thus created an important place for alternative culture in Cologne. In his new gallery, the “Staatsgalerie Delirien”, he exhibits interesting underground art and is committed to BfO (citizens for the homeless) in Cologne. He also works at the bar in the punk rock club Sonic Ballroom. Before that he went on tours, was active as a street artist, sang at KANTHOLZ KLAN and founded the collective Äther Youth together with Timbo Tanzpalast. And all of this enviably passionate, idealistic, creative and, above all, so damn personable. Plus, this guy has already seen more adventures than Jack London could ever have written. But even this would be worth at least one more interview ...

You organized the first concerts in your shared apartment in Cologne. What gave you this idea?

I have a bed that is a mattress and slatted frame in one. It was very difficult to transport with all moves because it is so bulky and extremely heavy. The bed was always on four stones and then at some point I thought to myself, if I turn it over and nail a wooden board on it, then at least I can use it as a stage. Shortly after this idea I drove to the Bauhaus, had two boards cut to size, nailed to the slatted frame, and off I went. When there were concerts, I would turn my bed and the band would play on it. When the concert was over, I turned the stage around again and then I had my bed again. Very simple.

One advantage was that I could have the bands that I wanted to see anyway play at my home and no longer have to drive around. So I could save myself train journeys, which I hate anyway. Another advantage is that you get to know different people and have fun together. One disadvantage, on the other hand, is the following: I used to misbehave at concerts a lot. I can anticipate this much: I got everything back twice and three times. That's why I can't really complain, but if lamps or radiators are torn down and 50 to 60 liters of water run through the apartment or some drunk people pee in your living room or throw up in a pan and throw them around, then that's just it not so funny. But the really only real downside of this whole thing is that you have to clean all that shit up the next day and that takes time. The problems with the neighborhood were limited. Whenever concerts took place in my first room in a shared apartment, I always bribed the Italian who lived among us with his family with money. We let a hat go around and he got the dough. Sometimes he took the money and sometimes he chased us to hell. Fortunately, there were no problems with the regulatory office.

A few years ago it was not so easy in Cologne - as a band or as an organizer - to find venues without taking a major financial risk. Was that also a reason for you to organize concerts at your home?

In any case. It was always about offering friends and acquaintances a platform to be able to play. Before, when I was still touring, I always thought it was awesome, but then I wanted to organize something myself. I like the whole network story and it's always nice to be able to help people to be able to perform somewhere without a lot of effort. In addition, I have always tried not to use my apartment as such.

You have been living in Cologne for a few years now. How do you perceive gentrification in Cologne-Ehrenfeld, the district around Underground and Sonic Ballroom?

In 2000 I moved to Cologne-Chorweiler and then in 2002 a little more downtown, on Widdersdorfer Straße in Ehrenfeld. At that time hardly anyone lived right up to the Ehrenfeld community center. But you can clearly see that gradually everything is shifting more and more. More and more apartments are being renovated in Ehrenfeld, which is why rents are increasing, which many can no longer afford or no longer want to and therefore keep moving out. Another example: The whole area around the Club Underground has now also been bought up and is to be restructured. And across from the Live Music Hall there is currently an old ship propeller factory that is being auctioned these days. But the whole corner area, if you turn from Vogelsanger Straße into Lichtstraße, has already been bought up. Such properties are no longer even sold to private investors, but only to industrial companies so that lofts or offices can be built there. These are just a few examples, I could name a few more. In any case, the change that is taking place in Ehrenfeld cannot be overlooked.

Can these changes also be seen in the cultural infrastructure?

In the last five or six years there have been several stores that have been reopened and then closed again because old halls have been bought up. Examples include the Sensor Club and the paper mill. Several studios were also closed. Of course there are still several alternative clubs and bars in Ehrenfeld that hold up.

You lived in Berlin for a year and a half, but then came back to Cologne. What do you prefer about living in Cologne?

Above all, this is the village flair, as I am originally from Brilon in the Sauerland. In Cologne you have relatively short distances and a lot happens in terms of concerts. And because I moved to Cologne for my community service, I also got to know some people who have become dear to my heart. So the two main reasons were bars and friends, haha. In Berlin-Neukölln, where I lived, there was somehow a gray veil over the whole corner. There was a certain sadness that dragged me down after a short time. It was quite difficult because very few people had dough. When I lived in this part of the city, there wasn't anything there with a thousand bars and an alternative program. In the evening I might have been to Bierbaum 2 or the cozy Dortmund. In the meantime it has practically developed into the new Kreuzberg. A lot has changed, which is why it has certainly become nicer there.

You recently opened Cologne's smallest gallery at Maastrichter Strasse 24, the “State Gallery Delirien”. What is your relationship to art?

I've always painted a lot, then done a lot of street art for a while, and then started making assemblages. Only in the last three years have I started collecting all of this and taking photos of it. And as far as my current work is concerned: I've always been into nostalgic, obscure things, but most of all I like that you look at my things and don't even know what it's all about. The saying goes well with this: This is art, you never get it!

What is the “Staatsgalerie Delirien” about, what is planned there in the near future?

Here, too, the aim is to offer friends and acquaintances a platform on which they can present their work, regardless of whether they are taking photos, painting or building any objects. Maastrichter Straße is very well frequented, and when this campaign creates a new network of people who may not have known beforehand who is still artistically active and everyone can benefit from it, that's a great thing. In October, musicians who are more or less well-known fax me A4 sheets of paper on which they have painted something, and then I frame them. In total, the pictures are then exhibited by eight people. Jello Biafra was the first to participate, but the rest should be just as interesting. On October 29th at 3 p.m., the individual pictures will be auctioned. The starting bid is 10 euros, and the proceeds go to the citizens of the homeless association.

You have also been running Äthervocx Records for about a year. What criteria do you use to publish records and what releases are currently planned?

So far it has been projects from friends and acquaintances: The first album was by BLACK SHERIFF, then the colorful picture vinyl by EILTANK, “Silent Observer”, - which the four of us made - and finally the KOETER album, which I did with Marcel by KOETER and the guys from Hectic Society. The next publication will be by Jan Fedder, co-founder of the flat share, and me.

Where do you see yourself in five years and what can you tell us about new projects?

In underpants in the Sonic Ballroom at the counter, throwing cats. In April or May 2012 I will have a bigger concert with five to six bands in Cologne. Furthermore, I thought about creating a huge mass grave of still living musicians - I am collecting DNA from now on - with a cross and everything that goes with it.

Which five records would you take with you to a lonely bar?