What religion is threatened

Mosques threatened: the state is challenged

One thing seems clear, Nurhat Soykan has had enough. After there had already been bomb threats against mosques in Iserlohn, Villingen-Schwenningen and Munich, as well as against the DITIB central mosque in Cologne, the nationwide largest mosque complex, in July alone, there have been further threats against mosques in Duisburg, Mannheim and Germany in the past few days Mainz given.

The 49 lawyer Nurhat Soykan is the spokeswoman for the Coordination Council of Muslims (KRM) in Germany. The KRM, founded in 2007, is the working platform of the four largest Islamic organizations in Germany. Members are the Central Council of Muslims in Germany (ZMD), the Turkish-Islamic Union of the Institute for Religion (DITIB), the Islamic Council for the Federal Republic of Germany (IR) and the Association of Islamic Cultural Centers (VIKZ).

For Soykan, the renewed threats are reason enough to appeal to the German authorities with an urgent appeal: "Muslims are deeply insecure. The state has an obligation to take confidence-building measures," she said in Cologne on Tuesday. The Federal Republic is simply responsible for ensuring that all people can practice their religion free from fear and violence: "Our coexistence is endangered, and so is our democracy. That is unacceptable."

With her words, Soykan runs open doors at Aiman ​​Mazyek.

The 50-year-old from Aachen is the chairman of the ZMD. In an interview with Deutsche Welle (DW), he made no secret of his concern about violence against Muslims. It is clear to him that "Islamophobia or hostility towards Muslims has increased enormously." We complain of attacks on mosques or desecrations almost every week, "he said. People have also been increasingly attacked:" Since 2017, the year in which Islamophobic attacks on Muslims for the first time and facilities have been counted, the attacks in which people are physically harmed have increased. "The quality has become more violent and the number of unreported cases is far greater because the police and the judiciary have not yet been sensitized and trained for this topic." In addition, many Muslims did not file criminal charges.

Official figures support Mazyek's theses. According to the Federal Ministry of the Interior (BMI), a total of 1,075 offenses classified as Islamophobic were recorded in 2017. 239 mosques alone were attacked. The final figures from the Federal Ministry of the Interior are not yet available for 2018. However, following a small request from the left-wing faction, there were preliminary figures that show that the number of injuries increased in 2018: 40 people had been injured in Islamophobic attacks by September. In 2017 there were 27 in the same period and 32 in the entire year. 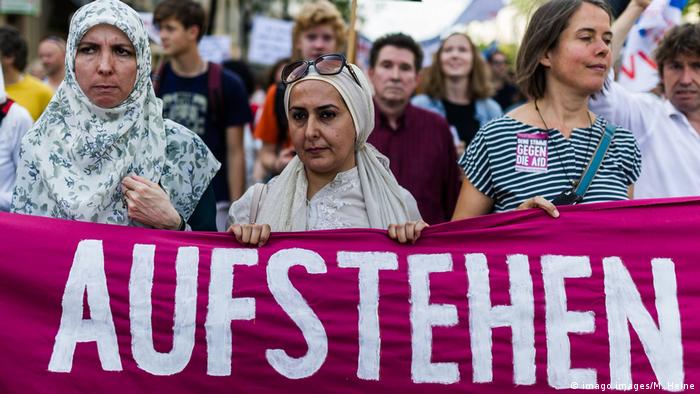 Many Muslims in Germany have long felt threatened, and in 2016 many took to the streets to demonstrate against racism

The so-called "Mitte Study" by the Friedrich-Ebert Foundation (FES) also shows how widespread reservations are in society towards Muslims. In a representative series of studies, the FES has had the spread of right-wing extremist attitudes in Germany examined every two years since 2006. Among other things, the researchers compare prejudices against different population groups. The result: Almost every fifth respondent made negative comments about Muslims.

Given these numbers, it is hardly surprising that some mosque communities began a few years ago to prepare themselves for threats with seminars, Mazyek said a few months ago. Security checks have been introduced in the communities, the way in which the police are addressed has been improved and problem awareness has been trained in order to prevent the communities from ignoring criminal offenses. 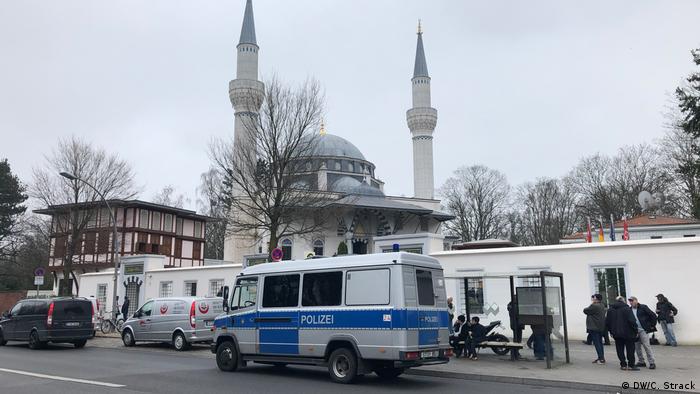 The exception remains: a police vehicle to protect mosque visitors like here in Berlin

With all due caution, however, one thing is also clear: there is currently no permanent police protection for mosques. The chief employer of the police, Federal Minister of the Interior Horst Seehofer, has so far said succinctly about this. "Religious institutions can also be targets of terrorists. If there are indications of danger, protection is increased."

In view of the latest bomb threats, however, these statements are no longer sufficient for Nurhan Soykan from the KRM: "The current threat situation is very underestimated. Our calls for more protection for mosques were not complied with." Fortunately, the bomb threats would not have come true. However, under the current circumstances, Muslims are far from going to the mosque without hesitation.