How hated is Congressman Steve King

Steve King is one of the most populist MPs in the US Parliament - and has chosen homosexuals as his main enemy.

In America everything is bigger - including the absurdities: The last brave homo-haters in parliament or on Christian television programs cause head shakes with Gaga statements.

In the USA there have been indications for years that the equality of homosexuals in all areas of life continues to advance. Die-hard homo opponents, many of whom are still in parliaments, are therefore becoming increasingly shrill. Here are the best samples of the last few days:

Let's start with the congressman Steve Kingwho in the past described same-sex marriage as evil "socialism". The hardliner is already looking forward to the time after his death, because then he will no longer have to deal with homos in heaven. In an interview with the Jefferson Herald, the 65-year-old from Iowa said:

I'm just saying that something that was a sin 2000 years ago is still a sin today. I guess I won't meet people who were condemned to hell 2,000 years ago if I can get there. Let us stick to this principle. [] I do not pass judgment. Those who choose a particular lifestyle that my - or their - faith does not tolerate must deal with God.

The statement about the straight heaven is not even the wildest thing that US representatives have uttered in the last few days. The Congressman Louie Gohmert spreads even wilder theories: The Texan is against gays being allowed to serve in the army because they always wanted to be massaged there - so gays are generally addicted to massage.

Here is his statement from a radio show:

I've heard people say, "Hey, you know gays in the military aren't a problem. Look at the ancient Greeks." Well, they had people who loved someone of the same sex and got massages from them before they went to war. But you know, that was a different way of fighting, a different way of war. And if you sit around and get massages all day before a big battle, you don't last long. [] It makes you vulnerable to terrorism.

Here is a video with the MP, who has sat in the most powerful parliament in the free world since 2005:

[Homosexuals] try to force Christian people to marry them or otherwise send them to prison. They want to force them to bake cakes for them or else send them to jail. They want them to hand over their sermons and reveal their innermost thoughts, or else send them to jail. These are the things that we have to deal with. These people are terrorists, they are radicals, they are extremists. No sane Christian would ever force anyone to do anything against their belief or otherwise go to jail. Well, [Christians] did that during the Inquisition. That was awful. This is a black point in our history. But that is no longer done.

Here is the video:

Pat Robertson reaches millions of Americans every day with his "700 Club", and a German version of the hate show is broadcast on "Bibel-TV". Over the past few years, Robertson has consistently harassed homosexuals - he said he could "throw up" at the sight of gay couples, or that gender equality led to child abuse.

His health tips are particularly dangerous: a week ago, for example, he warned against traveling to Africa because the towels there would have AIDS and poor Americans could become infected. Also here is a video:

One particularly funny statement comes from the southeast of the country: the Republican Congress candidate Anthony Culler from South Carolina claimed that gays were "gremlins". As a result, the following picture made the rounds in gay blogs like Queerty, which shows Culler and his wife: 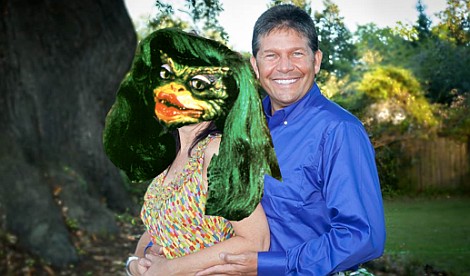 Incidentally, Culler justified his candidacy very modestly with the words: "God asked me if I would run". (dk)