Support the protest against the national anthem

The NFL, the kneeling against racism and Donald Trump

The debate is currently tearing the USA apart: The discussion about football players who do not stand when the US national anthem is played before the game, but kneel - in English "take a knee". It all started last year with Colin Kaepernick. He was then quarterback for the San Francisco 49ers, a team in the professional football league National Football League (NFL). He chose not to get up during the anthem to protest police violence against African Americans. Many athletes have since followed his example.

Now US President Donald Trump has interfered with an explosive comment. He has turned the simmering debate over Kaepernick and other publicly protesting NFL players into a national bone of contention.

"Ironically, President Trump has done one thing above all: that significantly more black athletes have now joined the protest movement because he said something so outrageous," explains Theresa Runstedtler, professor of African-American history at the American University in Washington, D.C.

What Runstedtler calls "outrageous" is Trump's remark at a Republican meeting in Alabama. "Wouldn't you like to see," asked Trump, "that the owner of an NFL team would say if someone despises our flag: Take the son of a bitch out of the game! Now! He's fired!"

The president went on to claim that the football players involved would then stop doing this and urged spectators to leave the stadium if players kneeled down during the anthem. Trump's attempt to stifle the peaceful protests did not go down well with many players, team owners, celebrities and the general public. As a result, more and more NFL players kneeled during the anthem and many owners agreed with them. The wave of solidarity was also supported by basketball legend Bill Russell and famous civil rights activist John Lewis. They posted pictures on Twitter showing them kneeling, "taking a knee". John Lewis chose a historic civil rights photo photo.

On Tuesday, Trump went one better and tweeted: "The NFL has all kinds of rules and regulations. The only solution for them is that they pass a rule that you can't kneel during our national anthem!"

Trump's recent comments have not helped bridge the already deep rifts in the country. According to a poll by NBC television, Americans are divided over kneeling football players and Trump's treatment of them. 52 percent of those questioned reject the "take a knee" protests, only 38 percent support them. However, 48 percent of the interviewees also disapprove of Trump's comments, while 38 percent approve them.

"It shows us that we have an incredibly divided country and that many whites identify completely when Trump makes such provocative remarks about ethnic minorities, in this case about African Americans," said Mark Naison, professor of African American studies at Fordham University in New York City and former political activist.

Why did Trump even get involved in the debate? Both Naison and Runstedtler believe that after the failed health care reform and criticism of his dealings with storm-ravaged Puerto Rico, he wanted to rally his supporters behind him. "How do you rally your voters when you've just failed like this?" asks Naison. "One possibility is to appeal to racist resentment. Only with them did he win the election in the first place." Runstedtler adds: "He struck a chord with his conservative fans who watch football and probably disagree when Colin Kaepernick and other black athletes stand up against police violence and structural racism in the USA." 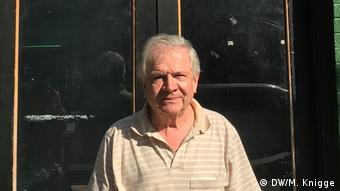 At the Blaguard sports pub in Washington, D.C., Jack Milne, a 70-year-old retired IT specialist, says he was trying to block out all of this controversy. The kneeling players didn't bother him either, because "people always protest against something". When he remembers Trump: "In the past, presidents only talked about politics."

Alex Makrs is 30 years old, works at Blaguard and has a season ticket for the Washington Redskins NFL team. He says clearly: "That was not an issue at all before Trump made it one." Makrs was working behind the counter when the entire Redskins team got hooked and several players knelt during the national anthem. The silent protest didn't annoy him at all, he says. "What bothered me a lot more were the boos in the stadium. Most of them didn't even know why they were booing," he believes. It's not about the US flag, it's about racism. 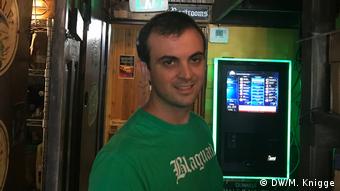 Makrs also points out a common misunderstanding: There is absolutely no old tradition of NFL players on the field during the national anthem - this is a relatively new phenomenon. In fact, until 2009, the team stayed in the dressing room until the game started. Since then, the Department of Defense has paid the NFL to have the anthem played - team members are required to be present, but not required by regulations to stand.

Many critics complain that such a patriotic show does not fit in a professional sports stadium. It's tough business for the NFL. Two years ago, Republican Senators John McCain and Jeff Flake published a scathing 150-page report entitled "Addressing Paid Patriotism." In it, they show that the Pentagon is paying the NFL and other professional sports associations in the United States millions of dollars to honor members of the army during the games, for example by flying overhead military jets. The NFL then promised last year to return the taxpayers' money received for this. 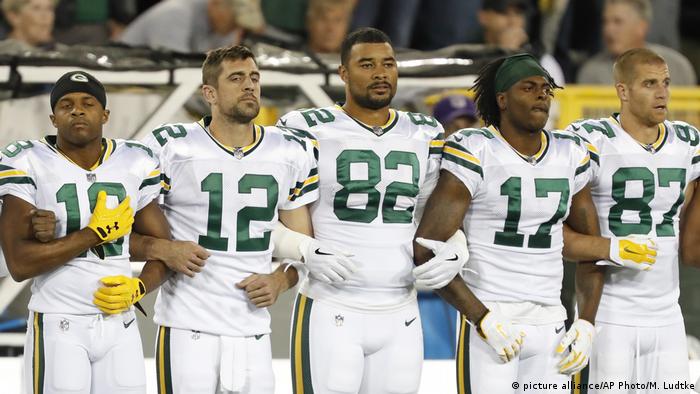 Make a mark by hooking instead of kneeling during the national anthem: The Green Bay Packers before their game against the Chicago Bears on Thursday in Green Bay, Wisconsin

And the "Take a knee" controversy has revealed another misconception, emphasize the scientists Runstedtler and Naison: namely that sport and politics should be separated. "Sport reflects the society in which it takes place," explains Runstedtler. "Sport is overloaded with how we deal with ethnic minorities. And that was also the case before Trump. Playing the national anthem at a sporting event is already a political process."

"Sport reflects the social and economic divisions in our society and creates a spectacle that encourages us to forget," said Naison. But the trenches that are now visible were not created by the players, adds Runstedtler. That already shows the fact that almost all NFL team owners are white, but the majority of the players are African American. "And just because they are athletes, they don't have to give up their civil rights at the entrance."