Is the legendary Robin Hood a socialist?

Robin Hood, the avenger of the disinherited, is better known from film and literature. The fighter for widows and orphans is actually not associated with the opera - apart from the work by Frank Schwemmer, which premiered at the Komische Oper Berlin in 2008, and which was then also performed at the Deutsche Oper am Rhein, and which is more likely aimed at a young audience. Even the "best known" setting has been completely forgotten today, along with its composer Albert Dietrich. To counteract this, as part of its annual excavation, the Erfurt Theater has put this work of German Romanticism, which enjoyed a certain popularity in the 19th century, back on the program for the first time in over 100 years and thus presents a composer who Probably only die-hard music experts as companions of Brahms and Schumann through their joint violin sonata should be known.

The plot of the opera is largely based on the sequence known from film and literature, whereby the love story between Robin and Marian is placed in the center and is supplemented by a relationship between Robin's loyal friend Little John and Marian's companion Ellen. There is no fighting or legendary archery in the opera. Robin Hood wants to steal his lover Marian from the hands of her guardian, the Sheriff of Nottingham, because she is to be married to Jeremias, the sheriff's nephew. The escape fails and Robin is imprisoned and sentenced to death by King Richard for having warned him beforehand not to stay in Sherwood Forest and not upset the order of the city. But Marian's pleading and Robin's steadfast loyalty to his lover and his followers let the king give in and lead to the pardon of the title hero.

It is important for director Jürgen R. Weber not to let the hero who has become a myth act in a distant past, but rather to locate him in the present with a view to the numerous emulators, more precisely even in Erfurt. In a video during the overture, for example, the theater's foyer faces Sherwood Forest, and two well-off theatergoers are robbed by Robin's entourage. After Robin's arrest, in the third act, the director can be seen walking through the inner city of Erfurt during a protest march in a further video, accompanying the protest march with a large "Free Robin" sign. But even if Nottingham is everywhere according to this approach and pictures of Che Guevara and Andreas Baader are projected onto the back screen, the costumes of Robin Hood and his followers remain as they are known from numerous film adaptations. Just a white theater mask, which Richard later puts on one of his soldiers, is enough to show that anyone can slip into the role of a freedom fighter.

The sheriff and the residents of Nottingham appear in fine evening wear and thus correspond with the audience in the hall. So the people of Nottingham are the theater goers themselves. Marian and Ellen move between these two worlds. So they initially appear in medieval green costumes, color-coordinated with Robin and Little John. Only when Marian is to be hooked up with Jeremias during the May Festival will her clothes be adapted in a modern way, whereby her somewhat filthy youthful demeanor signals that the two women will by no means subordinate themselves to this society. 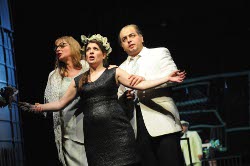 The Sheriff of Nottingham (Vazgen Ghazaryan) and his wife Kitty (Astrid Thelemann, left) want to marry Marian (Ilia Papandreou, center) to their nephew.

The stage design, for which Hank Irvin Kittel is responsible as well as the costumes, is mostly only hinted at so as not to hinder the video recordings (Sven Klaus), which dominate the staging. In the Sherwood Forest, for example, the fir trees hang upside down from the ceiling. Does the suspension mean that the world is upside down? In the second act, Marian's room is surrounded by four fences, which Marian sometimes pushes away while she sings about her love in a great aria, but then closes the room with them again. Maybe she is not sure if she is really ready to break out of her conventional life to live a life of freedom outside of society, like Robin Hood. The rest is indicated by video projections. In addition to these projected sets, there are also recordings of the silent film from 1922, and - as is usual in silent films - the plot of almost every aria is briefly projected onto the back wall in a single sentence in white letters. This description of the content is always followed by a comment, this time in black letters on a white background, which ironically breaks the protagonists' behavior. While these comments are sometimes funny (e.g. the comment on the soprano Malwina Makala, who embodies the boy Ralf: "If that's a boy, I'm Jesus" or "Don't cry, comrade! Do something!"), Sometimes too Critically questioning Robin's actions, if he only thinks of his lover and not of the fight for freedom, a comment in the third act perhaps goes too far, which - if not meant seriously - calls for "Burn all opera houses down".

But Weber seems to be important, especially with a view to the numerous emulators of Robin Hood, not to idealize the title character and instead to warn that every utopia also has its dark side. In the video projection of the overture after the robbery, the theater-goers have their throats cut, which goes just as far as the terrorist acts of the RAF or the oppression of entire peoples in the name of socialism. The fact that people are guided more by feelings than by ideals is shown in numerous phallus symbols and breasts, which are often projected onto the canvas in the style of wall smearings or are incorporated into the drawn stage design. 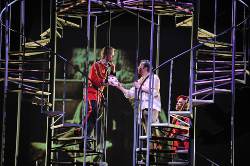 The character drawing of the king is ambivalent. Weber seems to mistrust his motives for pardoning Robin Hood, especially since the outlaws in the forest are not represented so harmlessly using the example of video projections. As a result, Weber develops a homoerotic relationship between Richard and Robin. While this is only subtly hinted at in the first act at the meeting in the forest and comes from the king, while Robin seems rather irritated by the king's advances, Weber goes too far at the end when Robin does not reunite with Marian after his pardon to the jubilant final song celebrates, but climbs a spiral staircase with the king and starts to smooch wildly, while Marian and Ellen, quite indifferent to the whole scene, tip alcohol behind the bandage at a picnic. At this point Weber may have missed the play a bit, although the beginning of the third act is still very moving. Richard steps down a spiral staircase to the delightful symphonic inter-act music, while Robin climbs another spiral staircase on the way to sentencing. In the middle, the two meet, pause, and Robin hands the king his mask. This symbolic rise of the title character through the imminent social rehabilitation by the king and the king's interest in his people, which is expressed in the sought-after proximity through the descent, is really very intimately staged. It is a shame that Marian's petition with a violin case, from which she takes a sword with which she wants to murder the king, breaks the emotional depth of the music and caricatures it. 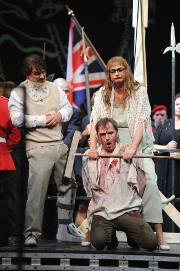 The singing is at a high level. Markus Petsch equips the title role with a strong tenor, which is also very confident in the heights, and embodies a very believable freedom fighter. Sebastian Pilgrim is in no way inferior to him as his loyal companion Little John and plays the part with a profound bass. Ilia Papandreou also inspires as Marian with a very lyrical soprano, who is also characterized by an excellent understanding of the text in the heights. Christa Maria Dalby gives a very cheeky Ellen with a very youthful, fresh soprano. Peter Schöne particularly likes the strong baritone in the role of the king, whereby his facial expressions and gestures are very convincing in making Richard's motivation for Robin's pardon clear. In the smaller parts, Malwina Makala's soft soprano as Ralf and Vazgen Ghazaryan's interpretation of the sheriff are particularly positive.

The Erfurt Philharmonic Orchestra under the direction of Johannes Pell knows how to bring the symphonic sound of this romantic opera to full bloom and thus to question whether this work has not unjustly fallen into oblivion. In the end, there was long and well-deserved applause for everyone involved. Weber's directional concept went too far for only one viewer, which he documented with a lonely boo when the director appeared.

An update of a completely unknown opera tailored to the city, without taking away the magic of the myth, and thus a great opera experience in Erfurt.