What is georeferencing in ARC GIS

ArcGIS example 11:
A scanned aerial photo is available and you want to add this recording to a new project. Unfortunately, the recording (screenshot from Google Earth) has no geographic information or any assigned coordinate system (so it is not a Geo-Tiff). On the basis of already existing digital basemaps, the image is now to be georeferenced in ArcGIS.

Instructions:
Since this is a different study area, we create a new directory Friedhof with the subdirectory DGK in our workspace with ArcCatalog. In this subdirectory DGK we copy the files (the raster dataset) aaseeGK5 and aerial photo from the original data directory GIS_Geol_Block_SS / ArcGIS / Muenster with the copy & paste functions of ArcCatalog (!). The use of ArcCatalog (instead of Windows Explorer!) Is always necessary, because all the necessary files are automatically copied with it (in our special case, however, this would not be absolutely necessary, since we do not want to create any additional FDS in a new PGDB later) .

With ArcCatalog we can also carry out an initial inspection of the raster data imported in this way: Under the Preview tab, the Geography option provides us with an initial visualization. On the one hand it is a German basemap 1: 5000, which covers the Aasee and its surroundings including the central cemetery and on the other hand a screenshot from GoogleEarth with a somewhat smaller spatial coverage. In the ArcCAtalog we now have to add the complete details of the reference system of the base map according to example 1 correctly via RM >> properties >> spatial reference system (3-strip GKS) - this is not possible for the aerial photo, as it ( yet) does not have any spatial pixel coordinates.

As can also be seen above, the aerial color image from ArcGIS is automatically broken down into the three channels (bands) of the RGB: Working with multispectral data sets (e.g. satellite data) is therefore also possible in GIS in principle. 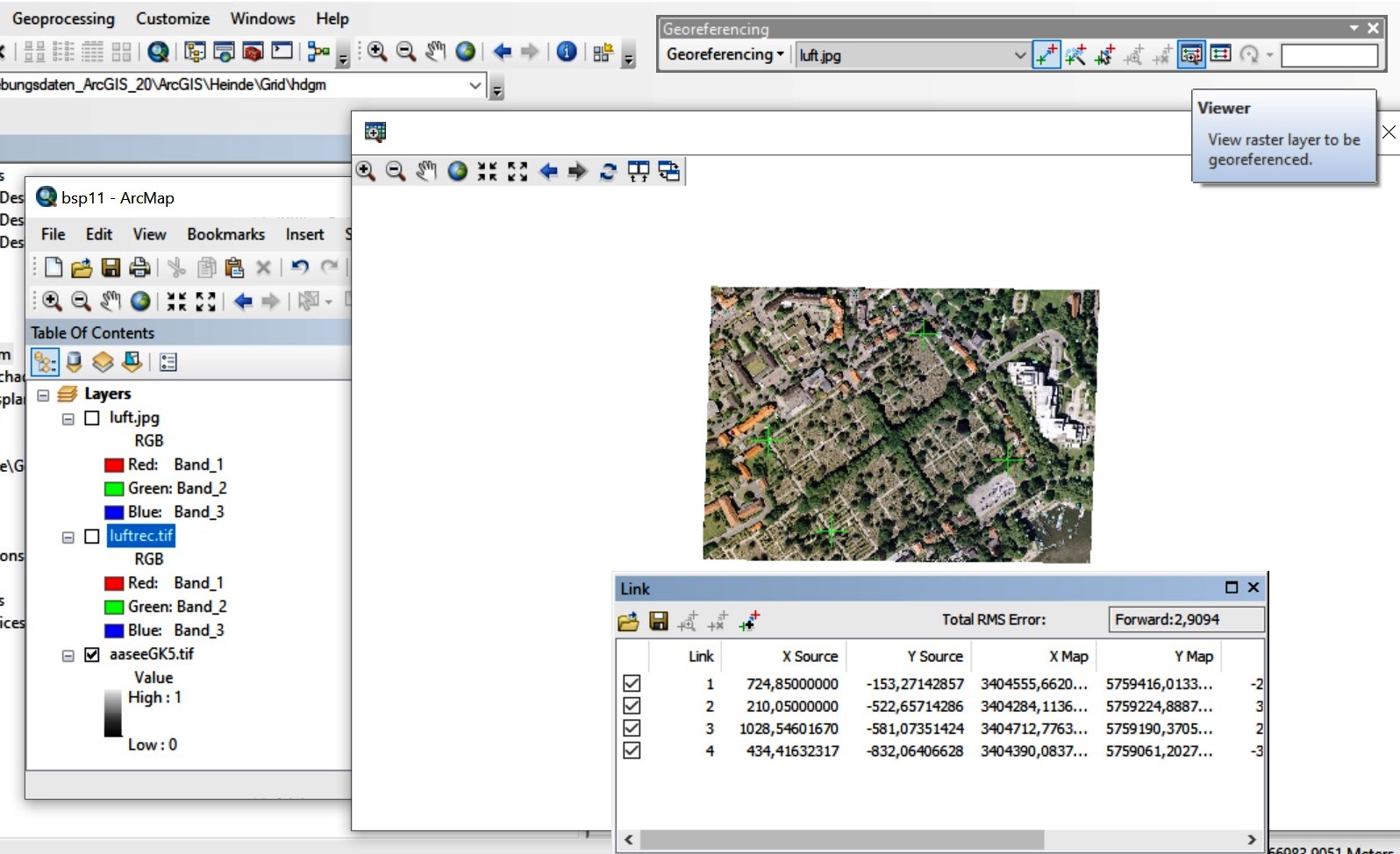 For georeferencing, generally select points that are easy to find on the already georeferenced map image (or the georeferenced vector data) and the aerial image to be georeferenced (e.g. building edges, road, path or coordinate intersections). Select the Add Control Points icon from the georeferencing toolbar and click on the desired point on the aerial photo to be referenced: a green cross appears. If the position of the green cross is not correct, you can delete the cross again with the ESC key. Then use the Zoom To Layer option and the movement tools to search for the corresponding georeferenced point on the map and click it with the Add Control Points tool: a red cross appears. A displacement vector appears between the two separated crosses. For the sake of simplicity, you should use the viewer function contained in the tool and the view link table - this makes it easier to 'jump back and forth' between aerial photo and map!

Set at least six points in this way (so that bad control points can be deleted later, see below). These should be distributed as well as possible on the map that you want to georeference (avoid clusters!). Normally, the data record to be referenced automatically moves step by step to the correct position. Should it be necessary, incorrect points in the table can be marked and deleted. Also note the different levels of residual positional errors of the individual points! 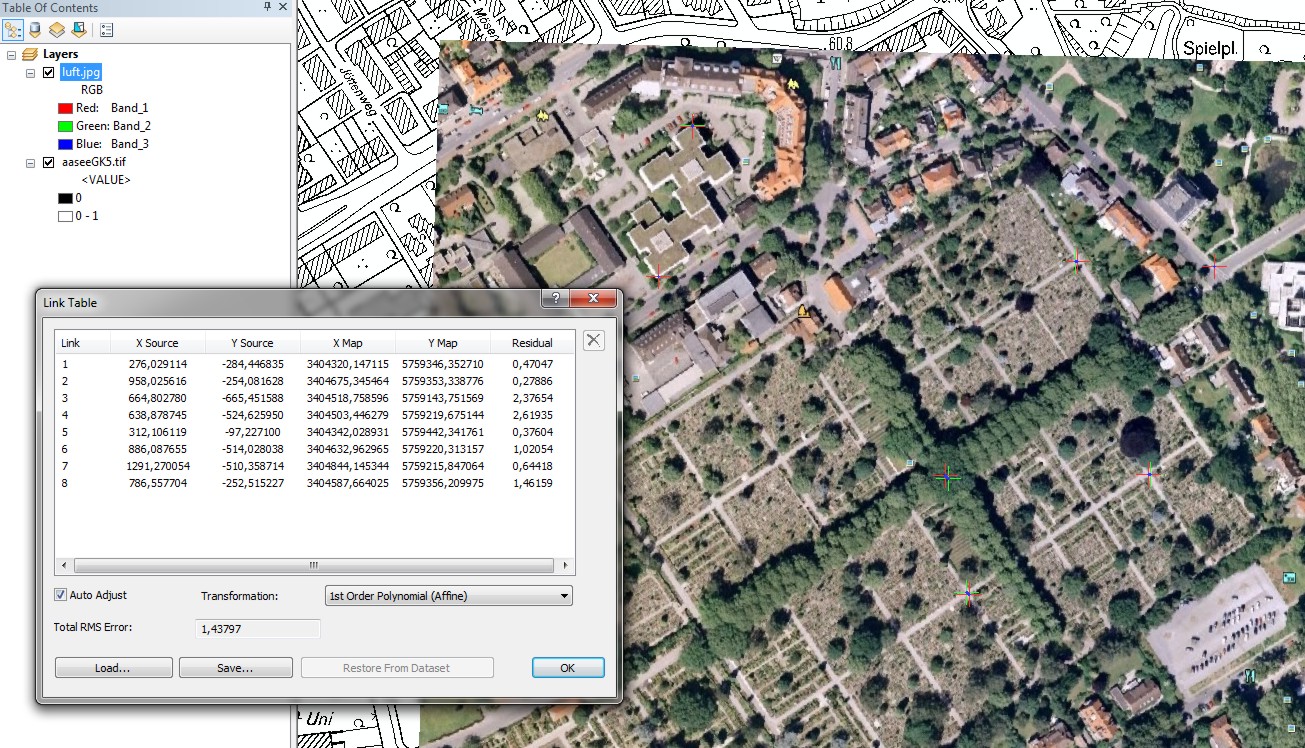 If you have enough points (mathematically at least 3 for an affine polynomial transformation), you can select the Update Display option in the georeferencing menu to move the image to be referenced. The newly referenced picture should match the data already referenced. If the result is unsatisfactory, check whether a point has a large residual value. If so, an error or inaccuracy has likely crept in. The 'link' can then be deleted and the georeferencing calculated again. The RMS error (Root Mean Square Error) shows the mean positional accuracy relative to the reference template that can be achieved with georeferencing. If the referencing has been carried out satisfactorily, it must be saved permanently (* .tif, i.e. as GEOtif!) Under Georeferencing >> rectify as a new file in the working directory. For the visual check, load the newly calculated aerial photo into your project and overlay it with the transparent GK 5000 for a final check. 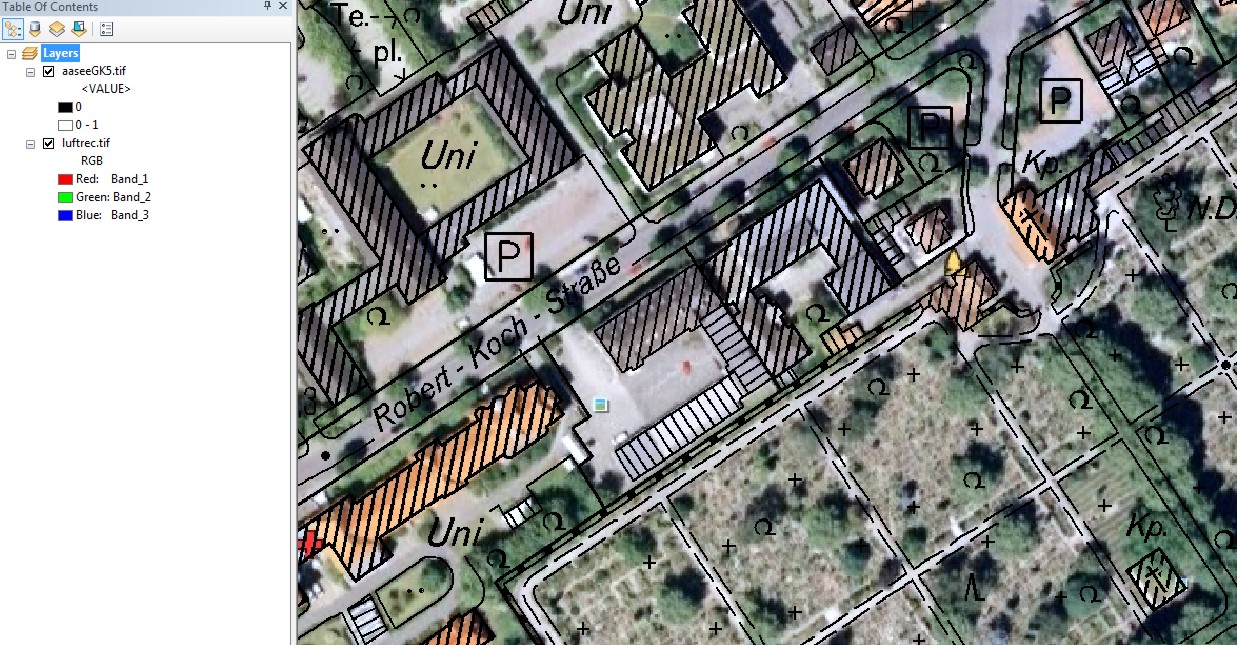 Georeferencing variant without changing the scale

If the image to be referenced only needs a rotation, scaling or translation (and no change of scale), it can also be referenced with the tools Rotate, Scale and Shift. 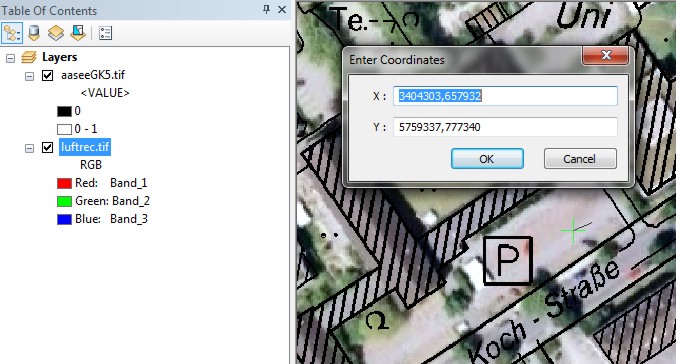